Walking along the coastline of the stunning pacific northwest I got my first glimpse at the fairytale toadstools, Amanita Mascaria, nestled in the grass by my feet. These iconic fungi look like almost every mushroom depicted in a children’s book about fairies with their beautiful cherry red tops freckled with white spots. Also fondly referred to as Fly Agaric, they have a long history in traditions globally being used in sacred rituals, as an insecticide, and may even be responsible for the creation of the beloved Santa Clause.

Where To Find Them

Fly Agaric loves the woodlands and the trees that make up these stunning, damp landscapes love them just as much. They nestle in among birch, pine, and spruce roots transferring nutrients into their roots. They are native to the UK but can be found in the Northern Hemisphere, The Mediterranean, and Central America. Over most of the regions, these fairy homes can be seen spotted thriving in the autumn when the seasons begin to change but on the Pacific Coast, they can be found into the early months of winter. Unfortunately, this red-topped beauty is so effective at growing that in some areas in New Zealand and Australia it has begun to replace the native fungal species. 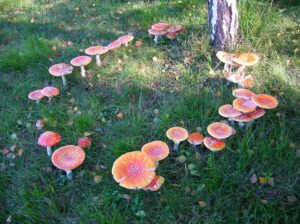 Let me pull you back to the greener side by sharing how Fly Agaric is commonly found growing in mythical fairy circles. For those of you that haven’t seen one, they’re naturally occurring circles made up of mushrooms. These can be tiny or up to 600 meters in diameter depending on how long the mushrooms have been growing there. Folklore says these whimsical rings were created by fairies dancing in circles through the dewy grass. Be careful not to step into these circles or you may be forced to join in their dancing whirlwind until you drop.

How To Identify Them

This can be tough because of the diversity of these fungi. The caps of these iconic mushrooms can be white-capped, yellow, orange, or red. The ones I saw that were my fairy dream come to life.  the red caps are more common in these rainforest regions but if you’re reading this in the UK you are probably more familiar with them having an orange-y tinge. This makes it harder to spot but who doesn’t love a challenge and a whole lot of rainbow diversity?  These cherry caps start out as rounded little domes but as they age they become shaped like dinner plates. As always while foraging, if you’re not absolutely sure about the mushroom you’re looking at don’t eat it. Amanita Muscaria has an unfortunate resemblance to other deadlier mushrooms including the death cap and destroying angel. 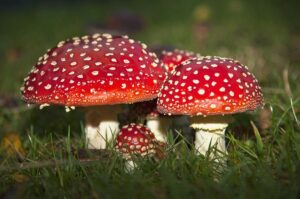 Different advocators for this poisonous mushroom bring to light the fact that the psychedelic effects brought about by this fungus are different than those of psilocybin.  Although a magic mushroom the active psychogenic is muscimol.

“First of all, we need to stop comparing it to psilocybin, because it’s a completely different species, talking about Amanita like it’s a psilocybin is like comparing humans to fish, they’re just not the same.”

Depression, anxiety, nerve pain, and body aches can be treated with Fly Agaric. Mycologists are unsure if the benefits outweigh the negative effects of this poisonous mushroom though. If prepared incorrectly it can lead to euphoria, drowsiness, vomiting, stomach cramps, paranoia, amnesia, and muscle twitches. Try not to let that turn you away from harnessing the many benefits of this medicinal mushroom!  I’ll take you through how to safely prepare these nutty snacks.

How To Prepare Fly Agaric

The poison in this beautiful mushroom is mostly due to a chemical called isotonic acid.  Long discussions about how much of this toxin needs to be removed from the caps before they become edible have been underway for years. Most people agree that 20 minutes is long enough to remove enough acid.  This will help you avoid the dreaded negative effects.  When prepared properly they even make a tasty snack.

After the boiling process, your mushrooms will have lost their cherry red hues and should now look pale and slippery. Make them more appetizing by frying them in butter or oil. When they are crispy and golden they have a beautiful, nutty flavor.

Micro-dosing psychedelics has become an increasingly popular way to harness all of the benefits without having to go on a full-on. “Trip” or negative side effects. Unlike psilocybin which follows 3 days and 4 days off approach, most people only miscode amanita every week or 2.  Although the research on microdosing this psychedelic mushroom is new the known benefits include treatment for depression, tics, epilepsy, and Parkinson’s disease. People report using it to increase focus, and mood which makes it the perfect fungus to battle wintertime blues.

Have you ever found some of these vibrant little mushroom caps while out in the woods or utilized them for their medicinal benefits?  Let us know about your experiences with Amanita Muscaria in the comments below!