Magic mushrooms have mystical effects and a huge range of medicinal benefits that all come from their natural psychedelic compound, psilocybin. Mushrooms are incredibly diverse, with more than 140,000 species, around 180 of which provide those groovy, psychedelic effects. Let’s dive in and explore the 5 most popular strains of magic mushrooms!

What Do Magic Mushrooms Do?

These unassuming, little button tops are hallucinogenic,  causing their taker to hear or see things that aren’t really there.  They’ve been around for longer than people and may be responsible for the evolution of the human brain.  Mushrooms containing psilocybin are used as a way to dive deeper into our consciousness. In the right setting, magic mushrooms bring about spiritual experiences and self-discovery. In smaller doses, they heighten creativity, fight depression, and help energize without any of the psychedelic effects (which means no “tripping out”). This works well for people who need an extra boost while they go about their days. 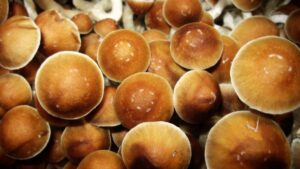 This golden psilocybin mushroom is by far the most popular globally. If you have ever taken a handful of mystery mushrooms they were most likely these resilient “cubes”. This is mainly since they are easy to grow indoors and have been a grower’s staple since the ’70s. Once humans became involved with these crowd favorites they began to breed and created more than 60 specialized versions of this pungent medicine.

Golden Caps aren’t only found indoors though- they also thrive in nature. You can find them wildly growing in the southern US, Mexico, Cuba, India, Southeast Asia, and Australia. They love fresh manure and can be found in summer where there are horses, cattle, or elephants.  This mushroom has a large, cinnamon brown top that’s usually about 2-8 cm large. when crushed, the flesh becomes blue which is another good way to make sure you have the right mushroom.

Psilocybe semilanceata is fondly referred to as Liberty Caps or Witches Hats because of their chestnut brown, bell-shaped tops. They can be hard to spot while foraging as their tiny stems are only 40-100 mm long, making them the smallest in their magical mushroom family. They grow wildly all over the northern hemisphere from New Zealand and Chile to Canada and Russia. in 1799 they became the first formally recognized psilocybin mushroom in Europe. An unlucky family decided to snack on mysterious mushrooms in Green park which led them to “trip”. Needless to say, don’t eat mushrooms you can’t identify. Not only to avoid unwanted trips but because they look eerily similar to other poisonous species that grow in the same area. Although Liberty Caps thrive out in the countryside, usually in large fields, it’s almost impossible to cultivate them indoors. 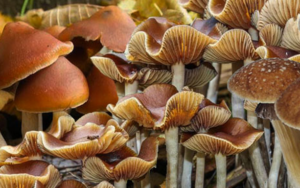 These caramel-colored fungi are the strongest psilocybin species that grow in the wild. They’re fondly known as Blue Runners, Blue Angels, Azzies, or Flying Saucers. In higher doses, they can lead to anxiety and temporary paralysis so tread lightly if you choose to begin a spiritual journey with these powerful mushrooms.
Azzies can be found all over the Western United States and Germany. They prefer to live near decaying wood, dunes, and seagrasses in colder climates. These brown capped fungi are covered in gelatinous skin that can easily be removed and are larger mushrooms, sizing in at 3-10cms. 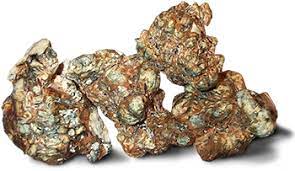 Psilocybin tampanensis is unique because it’s not the cap or stem that contains psilocybin, it’s the truffles it produces. Magic truffles, also known as philosopher’s stones, can be grown with or without their small, yellow-brown mushroom caps. These dense magic truffles will give you the same effects as other magical fungi but are less potent.
Philosopher’s stones were first discovered near Tampa in 1977, but haven’t been seen in the area since. It’s very rare to find them in the wild so the chances of you stumbling onto a secret patch of magic stones on a nature walk are slim. They’ve become popular for home cultivators as their easy to grow indoors. 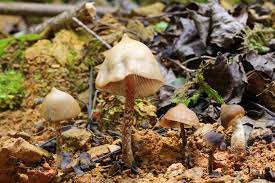 Psilocybe zapotecorum is named for the Zapotec Indigenous community of Southern Oaxaca, Mexico. Drunken mushrooms have a cappuccino-colored cap and a white stem that fades from blue to black with age. They grow inside of the Zapotec people’s adobe homes, thriving in muddy soil and wood debris.  Although common in Mexico, they can be found all over Central and South America but be careful when collecting them from the wild. Drunken mushrooms have a poisonous doppelganger called Galerina Marginata.

Drunken mushrooms have been used in traditional rituals for thousands of years. They begin by foraging in the forests during a new moon by a virgin female. After the mushrooms are collected they are placed on an alter beneath the moon’s glow. Participants begin on an out-of-body experience that can last up to 7 hours.  During this spiritual journey a calm, male voice speaks from another world which people often perceive as the voice of God.

“… they began to dance, some singing, others weeping, for they were already intoxicated by the mushrooms… some saw themselves dying in a vision and wept; others saw themselves being eaten by a wild beast; others imagined they were capturing prisoners in battle, that they were rich, that they possessed many slaves. When the intoxication from the little mushrooms had passed they talked over among themselves the visions which they had seen.”

-De Sahagun relates his experience of the ceremonies

These are only 5 popular species of mushrooms that come from an extremely large and extended family.  Psilocybin mushrooms exist almost everywhere in the world offering a huge range of benefits.  Let us know your favourite types in the comments!